Counting votes, the Wright way: what the AEC should be looking at

There’s been plenty of talk on the system of preferential voting in the wake of the Western Australian election rerun. But mathematics masters student Casey Briggs says we should focus on the method of counting itself.

There’s been an awful lot of attention on the Australian Electoral Commission lately. In the wake of entirely unknown candidates getting catapulted into the Senate, Parliament’s Joint Standing Committee on Electoral Matters is currently conducting an inquiry into the conduct of the 2013 election, and every man and his dog has an opinion on what needs to change.
So far most of the attention has been on the method of voting, with a shift to optional preferential voting and getting rid of group voting tickets amongst the popular ideas. But there’s one thing that’s not getting much attention: the method by which Senate votes are actually counted.

As William Bowe pointed out last week in his analysis of Western Australian Senate results, the transfer value of HEMP votes depends on how early in the count the Palmer United Party is declared elected. On current projections, it is HEMP preferences that push PUP over a quota and get the party elected. When this happens, all votes that sit with PUP are transferred to the next highest preferenced candidate, at a greatly reduced transfer value.

However, if PUP were to collect enough votes to fill a quota and get elected before HEMP is eliminated, then the HEMP votes transfer to Labor at full value. This entirely arbitrary line could mean a difference in the margin between the Liberals and Labor by as much as 3000 votes — possibly enough to change the result.

The fact that votes can have different values based arbitrarily on whether or not they happen to be sitting with a candidate when they are elected runs counter to our idea that all votes should be treated equally and have the same weight. 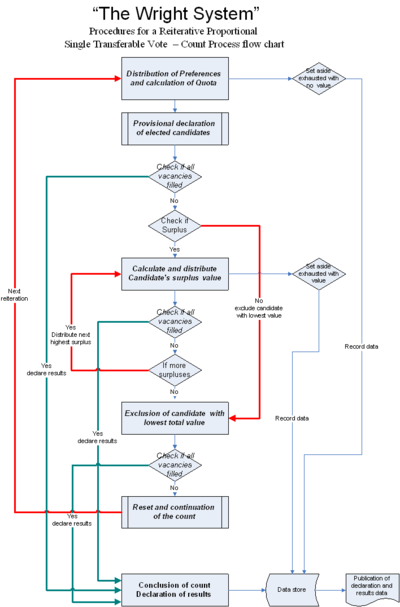 There are a few methods that treat individual votes more equitably, and often these work by continually reiterating the count of the election. One such method is the Wright system, first proposed by programmer Anthony van der Craats in 2008.

Under the Wright system, when a candidate is elected their surplus is transferred in exactly the same way as is currently the case. However every time a candidate is excluded, the count is reset and restarted as though that candidate had never stood in the first place, with all votes for the excluded candidate transferred to the remaining candidates according to their preferences. The result of this is that every vote has proportionally equal weight.

In the context of the WA Senate count, it means that regardless of when HEMP is eliminated, all votes that preference PUP get transferred at the same value when PUP is elected.

Obviously this would be a laborious count to do by hand, but it can be automatically counted using software quickly. Given that the AEC already enters all Senate votes into a software system to perform the final count anyway, adopting this system would mean no extra work or change to AEC processes.

Additionally, if this system were adopted in isolation it would mean that voters do not need to change the way they fill out their ballots, and confusion around changes in the voting system can be avoided.
Alternate counting methods do not relate to the controversial success of micro-parties in the last federal election. Nonetheless, any review of the electoral system that seeks to tackle these issues ought to seriously consider alternate, fairer, counting systems as well.

Perhaps the right way for the Senate is the Wright way.

There’s been plenty of talk on the system of preferential voting in the wake of the Western Australian election rerun. But mathematics masters student Casey Briggs says we should focus on the method of counting itself.

What can I say… I highly agree, we need to review the counting rules and the way the vote is counted.

The system that is in place was designed to facilitate a manual count. It is a trade off of bad practice short cuts designed to reduce the time taken to count the vote not to reflect the voters intentions.

With computerized counting we need to strip the system back to its basics and apply a reiterative count where the transfer surplus is weighted to the value of the vote and any surplus distributed as a single transfer without segmentation.

Likewise we need to do the same with exclusion. But so as to ensure that a full value vote originally for a minor candidate is always distributed to the next continuing candidate the best way to achieve this and to reflect the voters intention is to reset and restart the count afresh as if the excluded candidate had not stood.

A vote for an excluded minor candidate is redistributed so that the next available preference becomes their first preference vote and if need be forms part of a surplus of an elected candidate without skipping any candidate that had not been excluded. Only surpluses are distributed in any given iteration.

In the past the time taken to apply a reiterative count was prohibitive. with the use of a computerised counting system it is desirable and should be implemented, scraping the various tweaks, loops skips hops and jumps that the have been introduced to facilitate manual counting. Methods that distort the proportionality and simplicity of a Proportional Representation STV count.

No segmentation, a single transfer of surplus votes n any one iteration.

I should also point out that the system in place now does now does can advantage and disadvantage any of the major parties.

In the same electing in Victoria Labor Candidate David Feeney nearly lost out as a result of the distortion in the way the Surplus Transfer value is calculated.

Likewise in the original WE Senate count the results varied depending on which aspects of the count you applied.

1. The adoption of a weighted Surplus Transfer value is essential

2. The adoption of a reiterative count where the count is reset and restarted on each exclusion is highly desirable.

A single weighted transaction per candidate is a must

Removal of the Droop Quota is desirable

What is clear is that the System, as it is, can not and must not be allowed to stand.

We must go back to basics and simplify and in the process correct the way we count the vote. Which is what the Wright system does.

If we adopt optional preferential then a reiterative system is essential.